There’s more to poetry than pretty,  frilly words, repetitive rhyme and a sole devotion to emotion! Through our studies we are finding that poetry makes use of mathematics (Fibonacci, Sestina, Haiku, Tanka, Senryu.. ) where we count syllables, lines and stanzas to write our poems.

History is built into the study of poetry in that many poets over generations have inspired us to take up the gauntlet and write in homage to their style, rhythm or attitude. Repeating the past is an education in itself.

Of course, the written word is based on the concepts of language, grammar and literature. These are the studies which give our poems their structure and foundation.

There is music in worded verse, a lyrical expression that lives within the poems we offer.

Art can be expressed through words. I hear there is a poet who makes visual poems, “painting” pictures with his words in a very concrete way.

But there is also a science to poetry. This pursuit we’re on is a scientific exploration, in a way, as we delve into the workings of this process which consumes us. During the Poetic Asides Poem-A-Day Challenge this past April, Robert Lee Brewer asked us to pen a science based or scientific poem, One concept that came to mind is presented below:

I present the PERIODIC TABLE OF POETIC ELEMENTS! The table consists of 118 poetic forms and techniques based closely on the Periodic Table of Elements with which we are most familiar. Each symbol represents one of the functions we will use in our writing. During the course of the next few months you are asked to write as many of these forms as you can to the prompts that will be offered. Also, poems written for other prompts across the webiverse can be included if you so desire in order to utilize as many modalities as you are able.  Keep a tally (the provided table can be printed and used as a checklist) of the poems written. You need not write them in order of appearance, use them as you are comfortable in using them. You may want to write your favorite forms early and “challenge” (that word again) yourself with the more complex forms as your confidence builds. You decide how you use the forms featured!  You can repeat forms; they will all earn points. All I ask is that you include your name and indicate the form you used and the prompt by which it was inspired . Yes, even free verse is included… sort of a wild card  thrown into the mix.

As an added incentive, each form has been assigned a point value (aided by a draw of Scrabble tiles) These points are purely random, meaning a sestina could only be 1 point and a Haiku could gather a ten (both hypothetical values). I will publish this chart at the end of the September (tentative deadline is Sept. 30, 2015); you’ll have to trust your instincts. The most points will earn three of my chapbooks (WOOD, YOLO and either “Life is a Beach (and then you die!)”, “Intensities in Tent Cities” or “Rhyme of the Poet Laureate” (Your choice). Big whoop, I know! This isn’t a “challenge” per se. Think of these “points” as green stamps earn writing your poems! 😉

So join us in the process of poetics as seen through a “scientific eye”. Continue to RISE UP through poetry!

A short while back I had compiled a “book” on poetic forms that were featured here, at POETIC/ CREATIVE BLOOMINGS, POETIC ASIDES by Robert Lee Brewer and various other sources (or created by other talented poets).

All forms in the PTOPE above are included among the 300+ pages in this file, along with most examples. Each element lists the page number on which it appears. Each page references the element symbol and its location on the table. Find a link to this file below:

We’ve reached November and there is much going on in terms or our poetic pursuits. So if you are driven to the Chapbook Challenge at Poetic Asides, or participate in NaPoWriMo. we will be giving you all the time to complete these tasks, by ceasing operations here at Phoenix Rising Poetry Guild. It has been a good run and I appreciate all our loyal contributors. But our members have fallen away and it seems it’s time to finally give it the rest it deserves. Thank you all for your support and contributions to making this a fun endeavor. Hopefully, we’ll find each other somewhere out on the wonderful Web! It has been a privilege hosting your works. Continue to write on, and RIGHT ON! 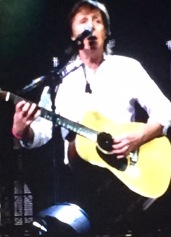 Had the thrill of seeing a favorite performer on Thursday as Paul McCartney played Buffalo for the very first time.

We’ll explore the famous people you’ve seen  or actually met in your lifetime. Write a tribute poem in their honor. Aside from Sir Paul, I had the privilege of meeting Olympian Jesse Owens when I was a young man. His story and inspiration had a profound affect on me. Who will you write about?

Halloween approaches and it conjures up associations with the horror films of Hollywood. There was “Attack of the Killer Tomatos”, “Frankenstein”, “The Exorcist”. Think of anything Hitchcock… “Psycho”, “The Birds”, “Vertigo”. Think of a title to use as the title of your poem and write it. Or make up your own Horror film title and be inspired by it… If you dare!

Sorry for the late start. I’m battling an infection and not fully functional. A while back we explored the five senses. We will apply them this time to the season of Autumn.

Using some (or all) of these words, write your piece with a fall or Halloween theme. Theses are the sensory words we will use:

We continue our journey through the Fall Season. So you are asked to write a “fall” poem.. You may be asking, “Walt, haven’t we done this prompt?” But, I want you to think of things that fall or have fallen. Prices fall (maybe not lately), leaves fall, arches fall, and both Saigon and the Third Reich have had their falls. Even things that drop or are dropped end up taking a fall. Drop a few words on falling. Don’t let me down!

As the season takes hold, Autumn is a wonderful time to sit on the front porch with a cuppa (name your poison) and enjoy the beauty that surrounds you.

My go-to libation is a nice cup of tea. Strongly steeped and deep with flavor, the way I like it. Salada came up with a novel idea putting inspirations on their tea bag string tags. Tag lines, they were called. If you’re privy to the blend by all means, pour yourself a cup and use your tag as the basis for your poem. Make it a line, title or just be inspired by it for our poem.

Or use one of these:.

Gourmets first taste their meals with their eyes.

Change your thoughts and you can change the world.

This Wednesday, September 23rd, is the official First Day of Autumn. And our thoughts turn to the sights, sounds, tastes and smells of this flamboyant season. I’m thinking apple cider and pumpkin pies, the cheers of a football crowd and visions of the many vibrant hues as the leaves change their colors before they fall and we rake them into piles and in some circumstances are able to burn them adding another aroma of familiar times.

What are your thoughts of Autumn? What do you look forward to (or what do you dread?) What memories does the season bring? And let’s remember the colors of Fall. The range from still green through the graduations of golds, amber, orange, crimson, bright red, umber and brown, with every shade in between. You can also  choose a hue and making that the title of your piece, take the fall and write your poem!

It’s been quite the summer, as we finally get released from its steamy grip up in Western New York for cooler temperatures and

quantities of rain. Believe me, we could use it!

There is a beauty in a rainstorm, the sounds are near symphonic, a euphonic tintinnabulation for the ears. The sights are picturesque as it appears that everything looks better when wet. The air seems fresher as everything is awash with rain. So this week we are “write as rain”. From a soft spring shower to a torrential downpour, write a rain poem. I’m not so naive to not recall the power and devastation of too much of a good rain. Whatever your opinion of rain, good or bad, lay down your deluge of words in honor of one of nature’s necessities! And as the title says, let poetry rain (er, reign) supreme!

Do you remember going back to school and having your first assignment be an essay entitled, “What I Did on My Summer Vacation”? Using that thought as inspiration, write about something you’ve done this summer. It doesn’t have to be a vacation  per se, it could be something you did or happened on one solitary afternoon in your back yard, or a visit to someplace that allowed you to escape for a few hours. Any mental getaway will do to refresh your muse. Whatever it is, use it and be inspired by it! What DID you do on your summer “vacation?”

In an added prompt, with this being Labor Day weekend, you can also write a work/labor related poems as well. And yes, even THAT labor qualifies if you are so inclined! Think parades, cookouts, jobs, but get to work!