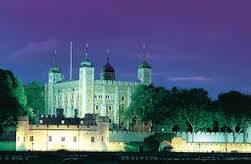 Her Majesty’s Royal Palace and Fortress, known as the Tower of London, is a historic castle located on the north bank of the River Thames in central London.  A grand palace early in its history, it served as a royal residence. As a whole, the Tower is a complex of several buildings set within two concentric rings of defensive walls and a moat. There were several phases of expansion, mainly under Kings Richard the Lionheart, Henry III, and Edward I in the 12th and 13th centuries. The general layout established by the late 13th century remains despite later activity on the site.

We begin in earnest in the Uniter Kingdom, as we visit the Tower of London. Write something on this site and an experience there. You could write from the POV of a palace guard, or a Londoner, a royal or maybe even as William the Conquerer, who had a hand in its design and construction.